Book Review: I Know This Man

Nabab Dzahutwy Aanakhwas a Student of Dr York, who grew with up him in the United States. He gives testimony to the impact that Dr York has had on his life, and many others in his community. Through the scroll ‘I Know This Man’. 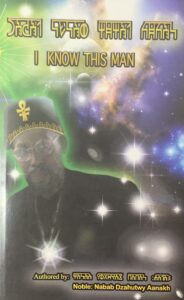 He starts out by giving an insight into the activities Dr York liked to take part in, for example, boxing, visiting bookstores to decipher the truth, and sewing clothes for those in need, amongst other pursuits. He explains how he worked with Dr York opening stores to do activities with the public as part of the aim to ‘break the hypnotic spell’ on others. Aanakh says that although doubters are unable to grasp Dr York’s’ essence, he describes him as ‘a supreme being sent just to prepare us who teaches the principles of love: divine love, darling love, self-love’.

Aanakh goes on to explain how Dr York taught that ‘self is important’. He taught others to learn as much as they can about themselves, so they can improve and in time, be appreciated by others. The book continues to discuss how different types of people, were drawn to Dr York. Aanakh witnessed him help those in the penal system from different backgrounds and doctrines, answering people’s questions ‘not biting his tongue’, keeping people thinking all the time and encouraging others to practice critical thinking as ‘if you don’t use the knowledge given to you, surely you will lose it’ and he describes a welcoming nature experienced by those who came into contact with Dr York who always left the door open for return.

Aanakh describes him as a person who doesn’t give up on others and always looked out for those in trouble. He gives the example of times he himself was in trouble, and being associated with Dr York saved him, and even stopped him from being killed. Despite this, Aanakh still saw others acting jealous toward Dr York.

Aanakh gives the example of Marcus Garvey ‘who came to help his people’ and says that Dr York’s work is a continuation of this ‘to take it to the next level’ through Wu Sabat, which isn’t a religion, but a culture. One which promotes etiquette, for example in the scroll ‘purity and neatness’ the culture also encourages diligence in the things that one consumes and says as ‘we must be careful of who we listen to and be careful of each word’. It encourages meditation as a regular practice as it is said to be ‘the art of listening not talking’. Wu Sabat also promotes healthy eating for example, through scrolls such as ‘are you what you eat? ‘

Overall, this scroll gives a first hand account of what it was like to be around, and associated with Dr York throughout his travels around America, and the behaviour he promotes which Aanakh describes as ‘right and straight up discipline’ and for others to seek to be righteous rather than claiming that they are.

Purchase a copy here to find out more.